The second conference was held this year in Xi’an, in Shaanxi Province in West Central China. A total of over 500 Chinese delegates and international lecturers from Australia, USA, Turkey, Japan and Korea presented a three day conference in this ancient city.

Xi’an itself is a city of over seven million people. It is an ancient city from the Han Dynasty and the Tang Dynasty, and importantly holds the well-known Terracotta Warriors some of whom are visiting Australia at the end of the year at the Art Gallery of New South Wales. Xi’an is one of the four great ancient cities of the world and has a rich archaeological record, some of which is only being discovered now. 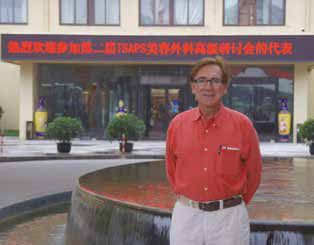 The meeting was sponsored by the Fourth Military Hospital. It was an impressive meeting, very well organised with excellent facilities and outstanding support by the hosts for the international guests. The conference was quite comprehensive for the Chinese delegates in attendance as a full range of cosmetic surgery topics, particularly breast surgery, body contour surgery, facial surgery (mainly eyelids and noses) and injectables were discussed.

I toured the Xijiang Hospital, which has 3,500 beds and is the third busiest plastic surgical hospital in China, with seven operating rooms dedicated to plastic surgery. There is also a very active Residency program. I toured the research facility, which is of an extremely high international standard. Several of their senior plastic surgery residents are progressing onto a PhD program.

For the presenters, it was important to have a knowledge of some of the unique aspects of modern Chinese aesthetics and lifestyles as procedures and approaches common in the West may have less relevance. For example, the ‘one child policy’ alters somewhat the problems of breasts in that women only have one term pregnancy and breastfeeding episode. Large breasts and ptosis of the breast, or droop of the breasts, is less common but is seen in China. The anchor incisions or vertical incisions for breast reductions are virtually not needed. The Chinese are very worried about scars and most of the breast augmentation is done through the axilla. There are very few Caesarean sections carried out by Chinese obstetricians, hence, tummy tucks are much less common than in the West. Liposuction is also different in that Chinese women rarely have saddlebags and because of that most of the liposuction is in the abdomen, hip and back areas only. 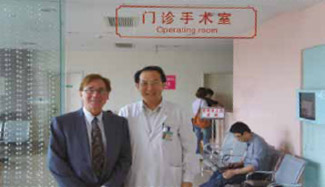 After the three day meeting in Xi’an, I went to Shanghai, where I was a guest of Professor Song, whom I have known for many years as a frequent guest to Australia, both in my clinic and to the ACCS’s Annual General Meetings. Professor Song is the Senior Plastic Surgeon at the Second Military Hospital and is associated with a busy downtown private cosmetic surgical clinic with seven operating rooms devoted to outpatient surgery.

Injectables are very commonly used among the Chinese. The use of cosmetic lasers is also very strong. Many of the lasers are produced in China and those that are most popularly in use are those for facial resurfacing as a fine complexion is highly desirable for the Chinese.

The commonest operations are still upper and lower eyelids and liposuction. Rhinoplasty is also often performed, however mainly for augmentation of the nasal dorsum with Gortex, which has some problems but is more common now than silicone implants previously used for nasal reconstruction.

With a burgeoning middle class, the Government and health departments are supporting their desire for cosmetic surgery. There seems to be little stigma about having cosmetic surgery in China. The issues now are quality of procedure, safety for the patients and training for the surgeons. Very few Chinese plastic surgeons have the opportunity of visiting conferences, other hospitals and expert surgeons internationally and so they are especially keen to organise and attend these large conferences to have our extensive expertise shared with them.

This was my fourth visit to China. I am always impressed by the rapid development of the country, the spectacular progress in the past 25 years and the exceptional generosity and enthusiasm to learn, demonstrated by the Chinese plastic surgeons.

REPORT FROM THE PHILIPPINES 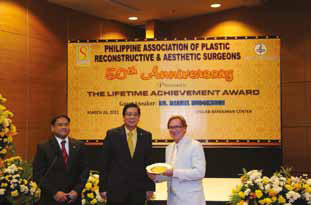 PhilippinesI had the privilege of being the Guest Speaker at the 50th Anniversary of the Founding of the Philippine Association of Plastic Reconstructive & Aesthetic Surgeons (PAPRAS) in Manila in March 2011. The Filipino Association has nearly 100 members who cover a vast range of all procedures, particularly paediatric craniofacial surgery.

I presented five papers at the Aesthetic Surgical Course on topics ranging from Facelifting, Mastopexy, Rhinoplasty and the Psychological Aspects of Aesthetic Plastic Surgery. One of the things that particularly impressed me was the range of cases and the technical expertise of the Filipino surgeons. I have been working with surgeons from the Philippines for 20 years in my charity, Operation Restore Hope, which has treated nearly 2,000 children with cleft lip and palate. This charity also now supports the Philippines Children’s Medical Center Craniofacial Program run by Dr Taps Gurango. Four sets of twins have been separated by Dr Manalo and his team. This is an impressive series of one of the most difficult and challenging problems in craniofacial surgery.

I was highly honoured and felt privileged to have been chosen as the keynote speaker at the auspicious event of the 50th Anniversary of the founding of the Filipino Association of Plastic Surgeons.