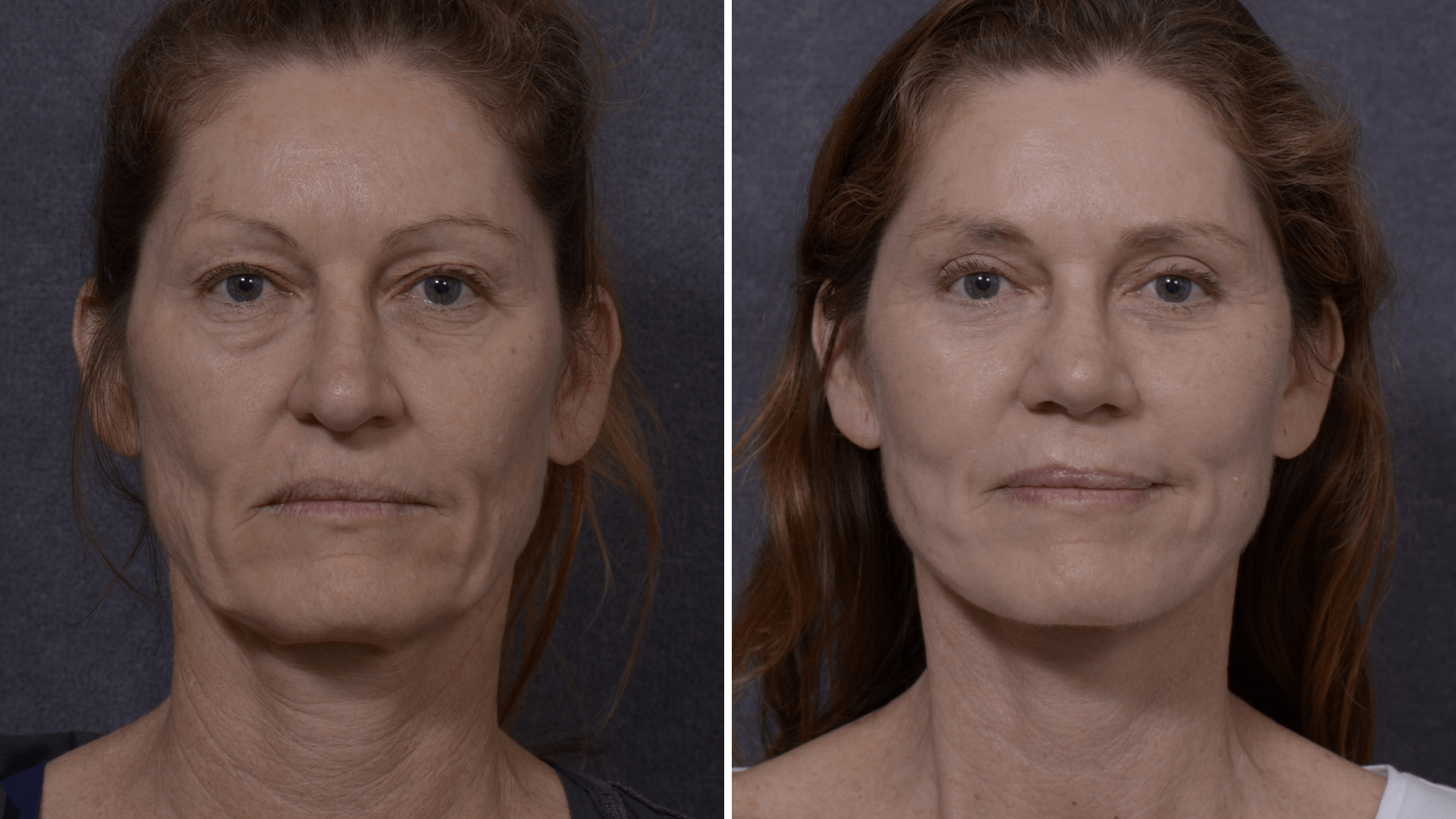 Before and after a facelift with upper and lower blepharoplasty, peri-oral dermabrasion and secondary rhinoplasty 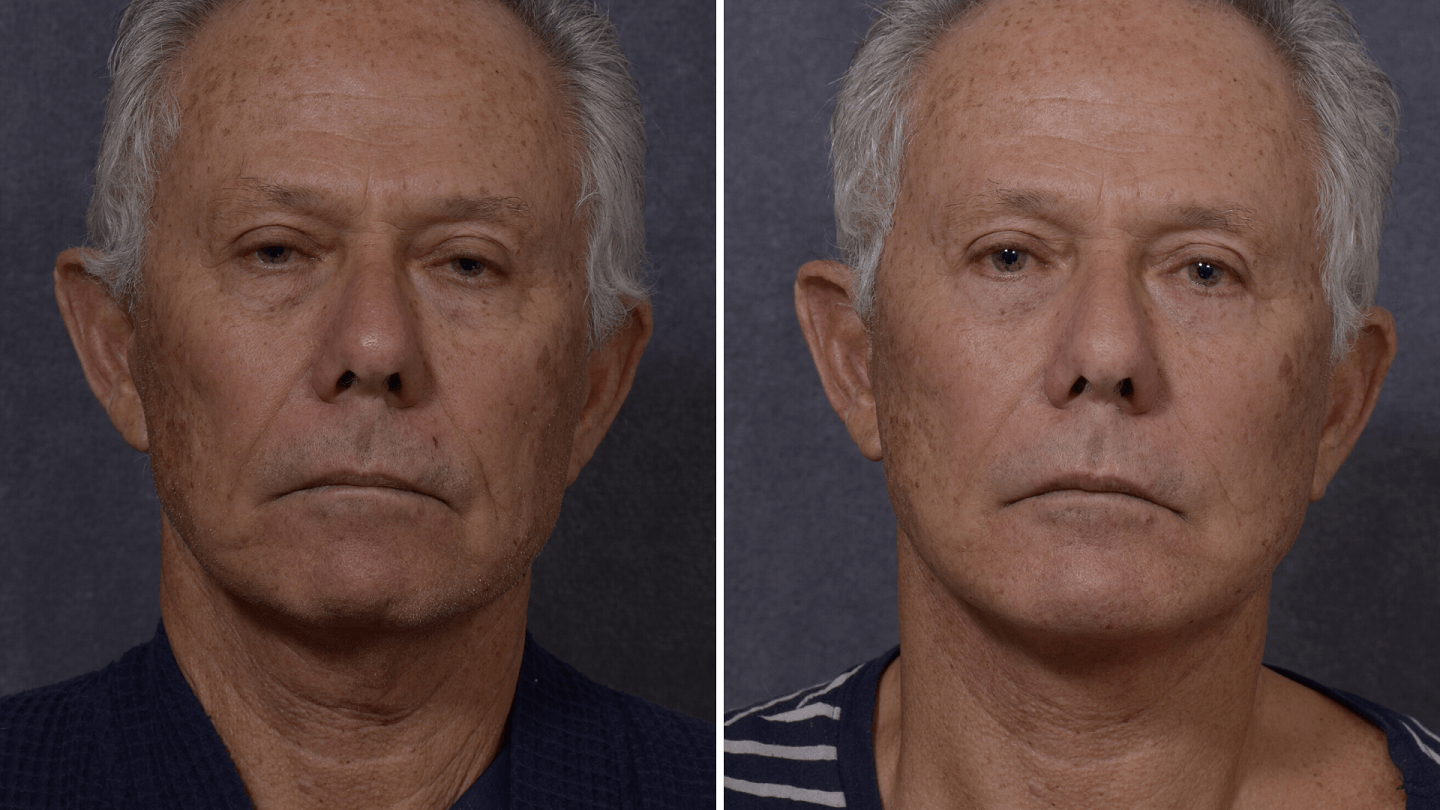 Before and after facelift, lower blepharoplasty and a chin implant

How To Determine the Appropriate Facelift Procedure For You?

Today more women and men are considering a facelift surgery or mini face lift to help restore their face to a more youthful appearance. No longer do you have to worry about having a “plastic” or pulled look that was one of the concerns of the facelifts of old times. Having performed so many facelift surgeries, Dr Hodgkinson’s facelift patients tell us that their family and friends say they look like themselves, just more youthful, refreshed and more vibrant!

Facelift surgery restores a more pleasing contour to your face and neck. A mini-facelift can be done alone, or in conjunction with other procedures such as a forehead lift, eyelid surgery, or nose reshaping. Ask Dr. Darryl Hodgkinson and the specialists at The Cosmetic & Restorative Surgery Clinic about the facelift procedure that is right for you, they are the leaders for facelift surgery Sydney.

Are you a Facelift Surgery Candidate?

If your face and neck have started to sag, you may be a good candidate. Dr. Hodgkinson can assess your skin’s elasticity, your complexion and help you determine the appropriate procedure for you. Remember, facelift surgery has been successfully performed on patients as young as 40 years old and as old as 80 years old.

Your general health will be assessed prior to any anticipated surgery. You should bring your medical records with you at your consultation.

How Long Does a Facelift Last & How Can I Extend Facelift Results?

The benefits of a Facelift

A facelift procedure aims to improve the appearance of sagging or loose skin, wrinkles, and deep creases. The tightening and removal of excess facial skin creates a youthful and rejuvenated look via a very common cosmetic surgical procedure.

The primary benefits of a facelift include;

You should be in good health with normal exercise tolerance and blood pressure to be the ideal candidate for the operative procedure.

Combinations with Other Procedures

It is quite common to combine a facelift with another procedure to achieve or enhance certain results. A facelift will focus on the lower two-thirds of the face, however, if the forehead or eyes also require attention, you may wish to consider one of the following options;

Eyelid surgery and brow-lifts are considered complementary to each other. Drooping brows can cause a fold of loose skin to hang beyond the lid margin. If gravity has been the cause of fullness in the upper lid, however, then a brow-lift surgery may be more appropriate. Eyelid surgery often has longer lasting results when done in conjunction with a brow lift.

Blepharoplasty will not necessarily remove all crow’s feet or wrinkles from around the eyes, in which case injectable fillers may be required. It is important when undergoing these procedures, to not remove too much skin and fat from the upper and lower eyelids as it can cause a gaunt hollow look. If the brow is lifted too much, the patient can end up with a more startled looking appearance. Dr Hodgkinson experience ensures you will not have those problems.

The full facelift is a comprehensive procedure that addresses the entire face and neck. The areas of focus of course, will depend on the individual’s condition and desired outcome.

The facelift operation elevates and re-drapes the facial skin and underlying musculature to eliminate laxity and sagging. The operation can be designed to correct problems in the neck, under the jaw and/or chin and in the cheeks.

The midface lift (addresses sagging in the cheek or middle third of the face) tends to be popular in the younger facelift patient whereas the older patients tend to require a full facelift to address ageing in the lower two thirds of the face.

Mini-facelift is a poor term but is used to describe a moderate tightening of the cheeks and jowls and neck usually with a smaller incision and no incision under the chin. Best usually at about 40-50 year of age.

“S”Lift, just tightens the cheeks, nothing is improved in the neck. There are very few patients who just require an “S”lift without some improvement to the neck”. “MACS” lift is similar, a combination of a Mini and S lift.

Facelifting has come a long way from the old style of operation that gave patients a ‘pulled’ or a ‘stretched’ look, which created a stigma or aversion to the procedure among the general public and still does.

Correctly performed facelifts by an experienced surgeon offer longer-lasting rejuvenation, restoring a more natural appearance without the stigma of an operation. It is critical, however, that the procedure is carefully individualised for each patient. Dr. Hodgkinson uses photographs of patients from their early 30s as a guide for achieving the most realistic and suitable result possible. This can also vary depending on the age of the patient as to which style of the procedure will be performed.

Dr. Hodgkinson, aims to achieve a more natural looking aesthetic, that is not overdone and works naturally with the contours of your face. The primary goal is to restore the tissues to where they were previously, which is why the use of past photographs during consultations is very important.

Procedures to be Wary Of

Some practitioners offer a different range of facelift procedures which could include the use of threading, a technique which lifts the structure of the face with sutures under the skin. The results are transitory and rarely satisfy Caucasian patients.

The “silhouette” lift is a newer thread lift procedure which includes the use of absorbable sutures. These absorbable sutures are said to cause fewer problems than the permanent varieties; however, the results from this procedure still don’t last more than a year to 18 months, limiting its cost-effectiveness.

After being trained by the leaders of the ‘New Age facelift’ in Newport Beach, California in the SMAS technique, Dr. Hodgkinson has expanded on his skills with the help of the French plastic surgeon Dr. Alain Fogli’s ‘Lore’s fascial lifting’ method. This procedure results in a more dramatic neck and jaw rejuvenation, making the neck appear longer and more defined. Dr Hodgkinson has written several papers and presented several chapters in the textbooks of his technique.

The major complication to avoid postoperatively is a haematoma or having blood collect under the skin flaps of the face. We offset this risk with a specialised clinical nurse who stabilises the blood pressure of all facelift patients to reduce anxiety or discomfort. This nurse can detect if hematoma has formed, in which case it can be quickly averted without any negative effect on the results of the facelift surgery.

Along with this, there is the risk of bruising and swelling in all patients which are quite normal and will vary from patient to patient based on the extent of the surgery. These bruises and swelling can also be minimised by early ice application and bandaging, with most patients returning to work after about two weeks.

Some patients may also feel depressed during the postoperative period; however, confidence will be restored with time as your rejuvenated and more youthful appearance settles in. 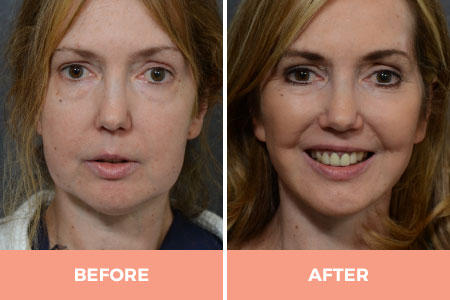 What is Involved With the Procedure?

When many people think of facelift surgery, they tend to think about processes that were used in the earlier days of the surgery, in which wrinkled skin was stretched to create a smoother surface. These days however, there are more advanced modern techniques which are used to reshape the layers of connective tissue under the skin, which don’t involve similar stretching techniques.

While the process for this procedure will vary between patients based on their needs and how their tissue will be manipulated, trimmed, folded and then fixed in place, the aim of the procedure is uniformly to achieve a natural, youthful appearance usually with discreet incisions to minimise scarring. For a facelift operation, patients will be placed under general anaesthetic and twighlight anaesthesia. 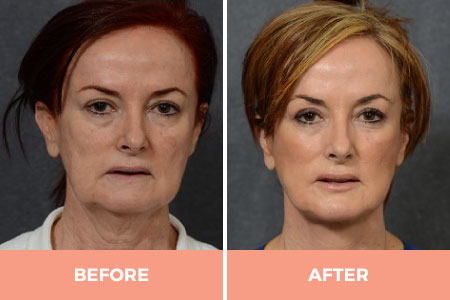 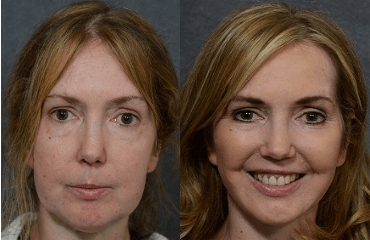 At a certain point, non-surgical methods may no longer do the job. Sydney plastic surgeon Dr Darryl Hodgkinson shares his approach to surgical rejuvenation of the face.Before and after facelif...

Sydney Plastic Surgeon Dr Darryl Hodgkinson Says the Key To Natural-Looking Results for Men is to Keep it Masculine.  A lot of men are hesitant about undergoing cosmetic surgery because they're worrie...

Sydney plastic surgeon Dr Darryl Hodgkinson believes there comes a time when only a facelift can effectively rejuvenate an ageing face. As time marches on, the use of Thermage, Anti-Wrinkle Injections, Injecta... 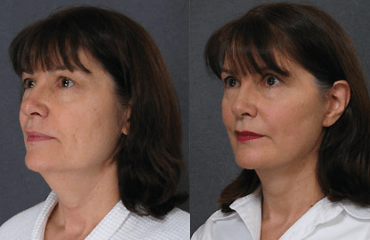