Not infrequently, patients present to us with inverted nipples. There are different degrees of inverted nipples. Firstly, there are nipples that never come out and never will. Secondly are nipples that are retracted, but when cold or stimulated, they will come out. Some women are told that breastfeeding will improve the projection of the nipple but many people do not want their nipples to be retracted and do not want to wait until trying the breastfeeding option, which may not work anyway.

Some patients have inverted nipples in association with breast hypoplasia, requiring a breast augmentation. Others have inverted nipples when they present for breast lifting or breast reduction in Sydney. There are non-surgical techniques that exist, such as suction type devices, however, they are usually not particularly satisfactory. The method that we use is a surgical procedure where a tiny incision is made underneath the nipple and then the tight ducts are released. We maintain enough ducts so that if a patient wished to breastfeed, she can. The nipples then are protected from pressure for six weeks following surgery and generally speaking, the results have a high degree of satisfaction. 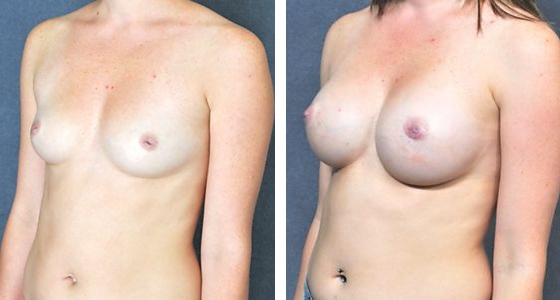 One problem that can arise is that if a nipple has been inverted for many years or for a patient’s whole life, then the skin has a very poor quality and takes time for it to take on a normal appearance. Another problem that may exist is that sometimes the scar tissue can cause the nipple to retract somewhat leaving the patient with one nipple that retracts more than the other producing a slight asymmetry. Occasionally secondary procedures are necessary to try and get the nipples all the way out. A nipple inversion procedure is performed on an outpatient surgical basis and carried out under a light general anaesthetic. All the stitches are dissolving stitches and the usual cost of the procedure is in the range of $4,000.00 to $5,000.00 per nipple including the Surgeon’s fee, the Facility fee, the Anaesthesia fee, and follow up. There is an item number, hence a rebate from Medicare for correction of nipple inversion.

Correcting Inverted Nipples at the Same Time as Breast Augmentation

Before & After Breast Augmentation with Correction of Inverted Nipples by Dr Hodgkinson Dr Hodgkinson in conjunction with Dr Nara, who studied under him, have recently published an article on […]