Cosmetic Surgery:
Aspects of facial reconstruction after the resection of skin malignancies

Plastic surgeons are responsible for the management of facial disfigurement. Advances in knowledge have come as a result of the management of facial injuries sustained during warfare. Traumatic injuries of the face are mainly caused by motor vehicle accidents; however, the majority of cases of facial deformity or potential facial deformity seen in clinical practice come from the surgical resection of facial skin malignancy. This article deals with the reconstructive possibilities which arise from the surgical management of facial skin malignancy, and is designed as an educational aid for patients who may be facing a surgical resective procedure on their face or scalp.

During the early twentieth century, the surgical management of facial skin malignancy was somewhat in disrepute due to the high recurrence rate and the fact that reconstructive efforts lagged well behind resective efforts. Consequently, the resection of skin malignancy often resulted in surgical mutilation. Since that time, there have been many advances and the constant refinement of techniques has resulted in a far greater range of options and greatly improved cosmetic results.

Careful planning when removing skin malignancies will minimise any deformity and patients who need to have large lesions excised can now be offered a variety of options for surgical reconstruction of the face.

The human face presents to the world our thoughts, emotions, experiences and age. In our society, a positive selfimage is synonymous with successful social and professional performance. A narrow range of acceptable facial appearance in Western culture dictates the need for a high success rate in our reconstructive efforts. After facial reconstruction, it is not acceptable to leave a patient with an obvious deformity; the patient then becomes the subject of negative comments, probing questions, rejection and subsequent extreme self-consciousness. Especially in the aged, self-worth is equated with acceptable appearance, and reconstructive efforts should always be aimed to give a good cosmetic result in all patients at all ages.

Facial reconstruction is based on knowledge about aesthetic units and the vascular, neural and muscular anatomy of the face.

Careful planning when removing skin malignancies will minimise any deformity and patients who need to have large lesions excised can now be offered a variety of options.

Before any facial reconstructive surgery can be attempted, it is necessary to appreciate not only the lines of relaxation and the aesthetic units of the face, but also the anatomy of the facial vasculature and the major nerves. There must be familiarity with the axes of the facial artery, supraorbital, supratrochlear artery, the transverse facial artery and the multiple branches of these arteries, in order that flap reconstruction be designed to incorporate known blood vessels as much as possible (Figures 3 and 4). Attention to the anatomy will ensure survival of the reconstructive flap. The facial muscles of expression should be appreciated (Figures 5 and 6). 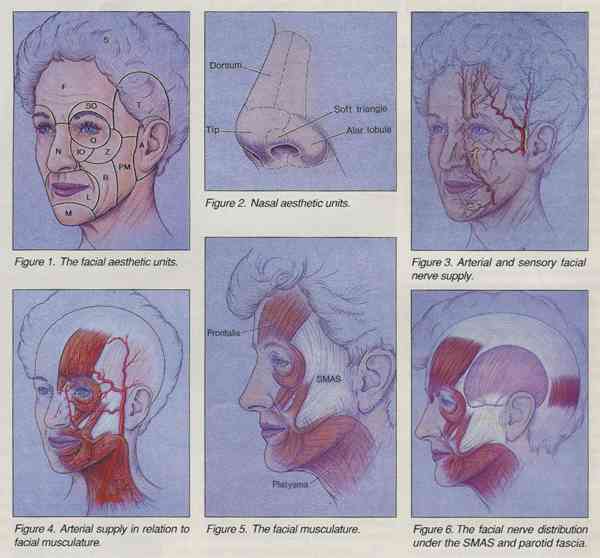 Excisions of small tumours should be carried out within or parallel to the lines of relaxation (wrinkles), and reconstructive efforts should be designed in order that any incisions or the closure of any incisions do not cross these lines or the aesthetic units of the face.

When a patient presents with a suspicious skin lesion on the face, the history of the lesion should be obtained, including:

Diagnosis can be ascertained by punch biopsy, using a 2 to 3 mm punch on the lesion. The punch wound should be closed with a fine suture, usually 5/0 or 6/0, and the patient should return in four to five days for suture removal and the pathology report.

The clinical picture, coupled with the biopsy report, will dictate the surgical approach to be taken.

The excision of small lesions

Ask the patient to dynamically activate or wrinkle the face. This allows the operator to place the excisions in the appropriate direction (Figure 7). This should be done before the patient is injected with local anaesthetic, because local anaesthesia may paralyse an adjacent facial nerve.

Anaesthetise the skin with a few millilitres of 0.5% lignocaine (Lignocaine HCl Injection, Xylocaine) with 1:200,000 adrenaline solution, using a 25- or 27-gauge needle. Use a 15 blade to excise the lesion. Use appropriately fine forceps and scissors in order to remove the lesion with a minimum amount of tissue damage. Obtain haemostasis using electrocautery or pressure; if necessary, use a subcutaneous suture of 5/0 Vicryl or catgut. The wound is closed after haemostasis is obtained. The skin is closed with meticulous technique, using a 5/0 or 6/0 Prolene or nylon with a sharp-cutting PC I or PC3 needle.

In the face, use either simple sutures or a running subcuticular suture (which runs underneath the skin).

Wound care consists of daily cleansing of the wound with a 3% hydrogen peroxide solution and a cotton bud, removing scabs or desiccated blood, and applying topical antibiotic ointment. The sutures are usually removed in five to six days.

This approach is for well circumscribed lesions on the cheek, chin forehead and neck. Closure must not distort the facial features, such as the eyebrow, nostril, eyelids or lips. 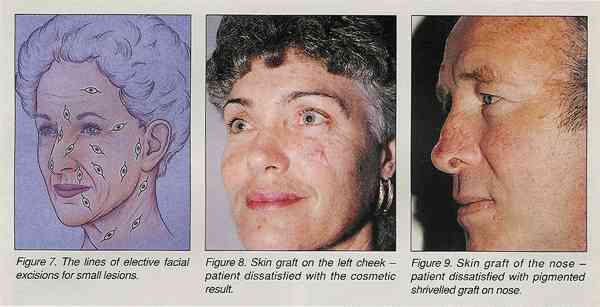 Referral to a plastic surgeon is appropriate for any skin malignancy of the eyelid, nose or lip. Excision and closure in these areas may require grafting or flap repairs to obtain a satisfactory result.

Larger tumours or tumours that recur after cautery, curettage or cryotherapy should also be referred. Clear margin excision is likely to be much larger than is expected clinically, because the lesions are recurrent and careful histological control is required to ensure the adequacy of removal.

Melanoma of the scalp and face should be referred to a regional melanoma centre for work up and management and, of course, specialised follow up is required.

The role of the GP

The general practitioner should be aware of the reconstructive options available. Patients, knowing that they have a facial malignancy that requires surgical resection, will be very concerned about their final appearance and fearful of facial disfigurement. The consequences of disfigurement, including social and professional embarrassment will have a negative impact on the patient’s quality of life, self-image and self-worth. Failure to successfully inform patients and leave them seeking alternative cures or delayed referral can result in a worse situation arising in the future.

Skin can be taken as a split thickness graft from the buttock or from the posterior auricular area or neck (full thickness skin graft) and transferred to the recipient defect in the face. This is not really an optimal situation, as the grafts do not have the same colour, are thin and do not result in adequate improvement in contour when a large piece of tissue is resected. Figures 8 and 9 show the unacceptable appearance of skin grafts. Both these patients sought and received flap reconstruction, after removal of the unsatisfactory grafts. In very extensive situations, such as a large superficial excision, a total aesthetic unit can be grafted with a more successful cosmetic outcome.

Excessive skin in an upper eyelid can be used as a donor graft for the other eyelid or the periorbital region. The cosmetic result is extremely poor when a skin graft is placed as a patch on the forehead, nose, cheek or perioral region: years later it will be recognised as a patch.

On the ear, a full thickness graft from the excessive skin in the posterior auricular sulcus can be used, if the cartilage framework is intact. Skin grafts usually take well; however, they are usually of poor colour match – as mentioned previously – and cannot be camouflaged easily with cosmetics. If possible, skin grafting should be avoided on the face.

Skin defects can be covered with a variety of flaps of specific design. The design is dependent upon adjacent skin laxity and the lines of relaxation in the face. The types of local flaps include: 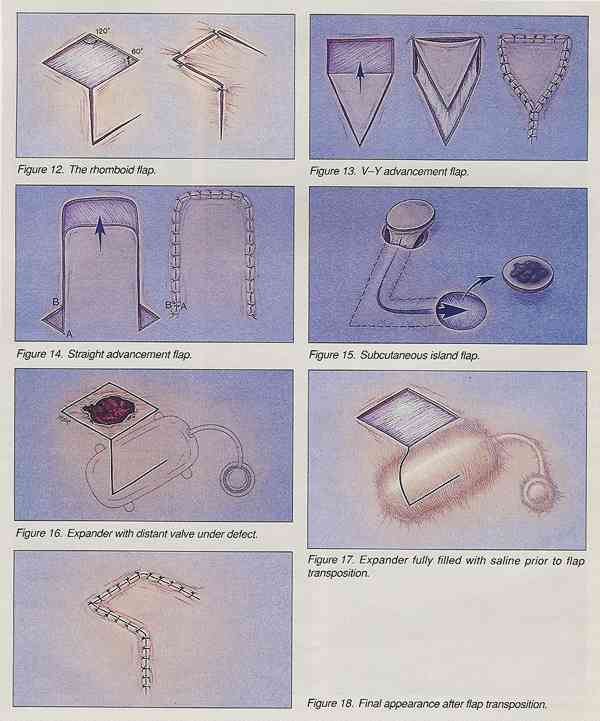 Rotation flaps (Figure 10) are often used on the scalp. A large flap needs to be used as the scalp is rather rigid and inelastic.

Transposition flaps (Figure 11) are often used on the nose and cheek.

A rhomboid flap is a type of transposition flap where the defect is converted into a lopsided square and the adjacent tissue is transposed in the same pattern. Its advantage is that closure of the secondary defect becomes a straight line that can fit into a line of relaxation on the face (Figure 12).

The V-Y advancement flap is very useful for lesions on the cheeks and chin area. These flaps rely on a random pattern of vascular supply in the subdermal fat but can be oriented about the axis of the facial vessels.

In island flaps the subcutaneous vascularised pedicle of tissue, which contains a known vascular system, is oriented to contain known blood vessels on the face. Their advantage is their length to width ratio, which favours a greater range of motion (Figure 15).

Other types of flaps which are not local include: free flaps and myocutaneous flaps.

Free flaps are flaps taken from a distant donor site, and are vascularised using a microvascular anastomosis to known vessels in the head and neck – usually the facial vessels or the superficial temporal vessels.

These flaps are useful in surfacing very large defects, and are particularly useful in scar contracture of the neck after burns, or after large resections of the scalp in which the meninges are exposed or of the facial region in which the sinuses or vital structures are exposed.

Myocutaneous flaps contain muscle and overlie the skin. They are used very often in the periphery – on the legs and arms – but have a smaller role to play in the face. This is because the mimetic musculature generally cannot be sacrificed, or else facial expression will be altered. However, the
central portion of the frontalis muscle is used to carry the forehead flap onto the nose for nasal reconstruction.

In very large defects of the cheek or neck, chest muscles such as the pectoralis or trapezius muscles from the back can be taken, along with a skin paddle to resurface large defects in the face. These large flaps are extremely bulky and will cover up any facial movement; they are used as a heroic resurfacing procedure in well advanced or highly malignant large tumours. 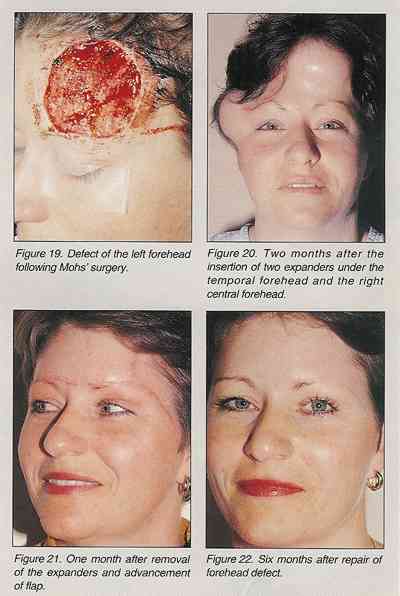 Over the last 15 years, saline-filled prostheses have been developed. These prostheses fit underneath the skin and stretch the skin over a period of months. Saline is injected into the expanding prostheses via a contained or distant valve (Figures 16 to 18). The expanders stretch the adjacent skin until there is an abundance of skin which can then be used for resurfacing on the face (Figures 19 to 22). When the expander has reached the appropriate size – usually after four to six weeks – it is removed and then extra skin is taken and used as a flap.

Fear of disfigurement is paramount in the mind of a patient diagnosed with having a facial malignancy requiring resection of facial skin. This fear can lead to a delay in or inadequate treatment of this malignancy. This article was written to provide the GP sufficient background to discuss the different types of flaps that are used for facial reconstruction. The fear of disfigurement cannot be underestimated for these unfortunate patients but the co-operative consultation between the patient, the general practitioner and the plastic surgeon can alleviate this fear. The GP can reassure patients that the surgical techniques available now can give very satisfactory cosmetic results (Figures 23 to 40). 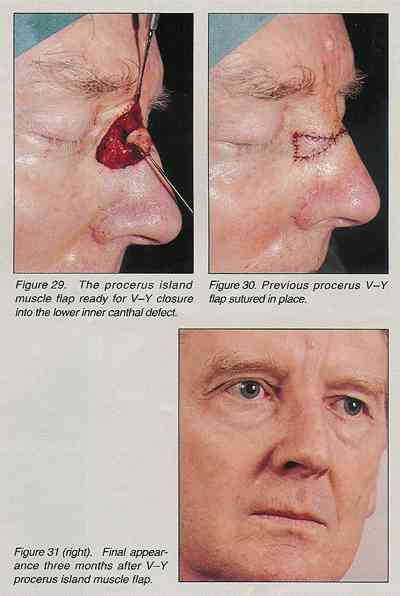 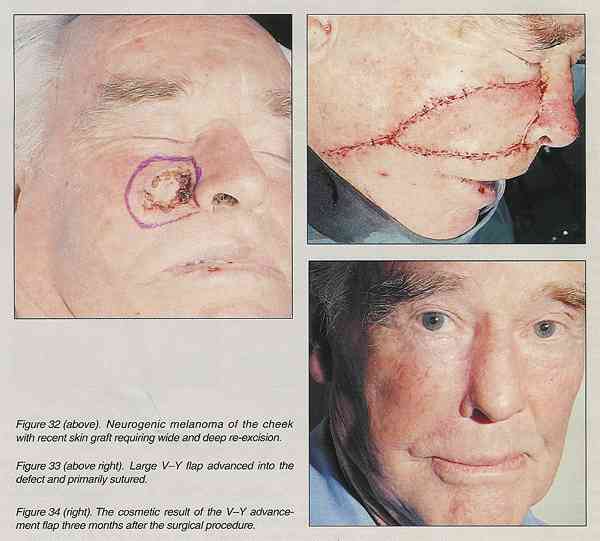 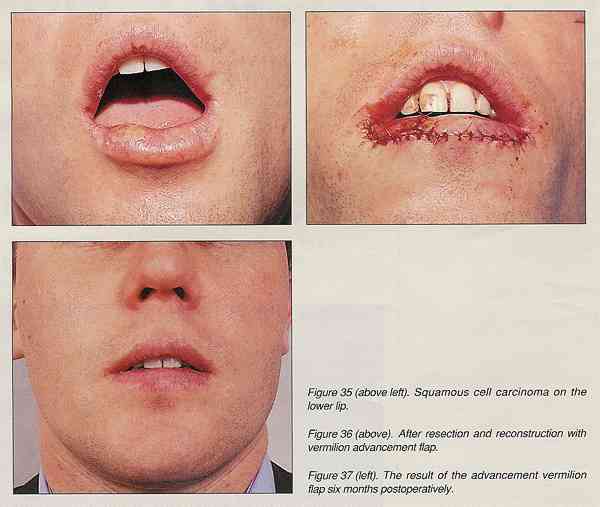