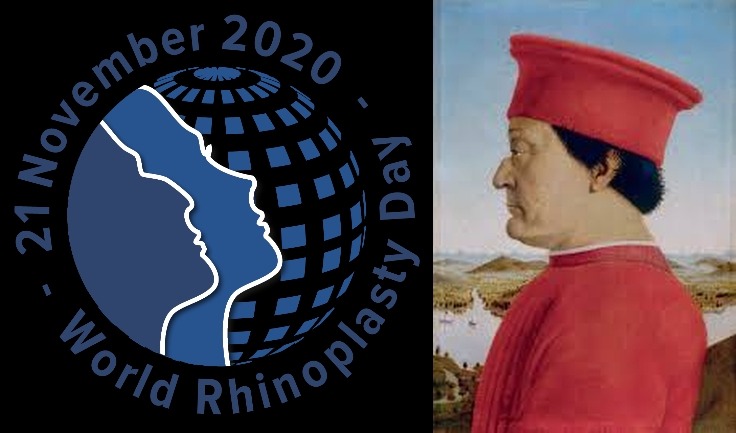 This year the plastic surgery industry is having its first “World Rhinoplasty Day”.  With the world talking about all things related to the nose, we have decided to pen some special articles about the nose not only in surgery but in art, history, literature and more.

The Duke of Montefeltro from Urbino, Italy may have been the first Italian and indeed European person to have had a rhinoplasty (nose reshaping surgery) as early as 1450.  Gaspare Tagliacozzi from Bologna is usually credited with having performed the first European rhinoplasty in 1597.  Every citizen of Urbino,, however, is said to swear that Federico, aka “the Duke”,  purposely asked to have a portion of his nose surgically removed for various quite practical reasons.

To cut a long story short, the Duke of Montefeltro, who was known as one of the greatest military strategists of the Renaissance, had a jousting accident at the age of 28 which resulted in him losing his right eye.  Being left with only one eye and a considerable sized nose, he had a problem.  On the battlefield, he lacked peripheral vision and could only see his opponents approaching from the left.  What to do?

Federico was obviously a man of both courage and ingenuity. It is said that he had the top portion of the bridge of his nose surgically removed in order to be able to see his enemies approaching from all sides.  Historical vignettes also mention that this was also beneficial for Federico in many other ways.  Being a man of power and intrigue he was not without his enemies as well as supporters.  Understanding the old adage that it is good to hold your friends close but your enemies closer, Federico needed to be able to to “keep an eye” on those near to him.  With the benefit of his reconstructed nose, the Duke was also able to monitor the movements of persons dining at his right side to ensure that they did not poison him.

Today, the Duke of Montefeltro is a readily recognisable figure to art and history lovers alike due to Piero della Francesca’s famous portrait of the duke in profile (shown above).  The portrait was painted as part of double portrait with the Duke’s wife Battista Sforza between 1473 and 1475.  Today the painting hangs in the famous Uffizi Gallery in Florence, Italy.

So, the birth of the Italian nose job may not have been for aesthetic purposes or even to improve breathing as rhinoplasties are today.  This early nose job  could have been a matter of life and death for the patient who as a major Condottiere (military commander) had to sleep with one eye open.