Home » Blog » The Ponytail Facelift – What is it and is it really new?

The Ponytail Facelift – What is it and is it really new? 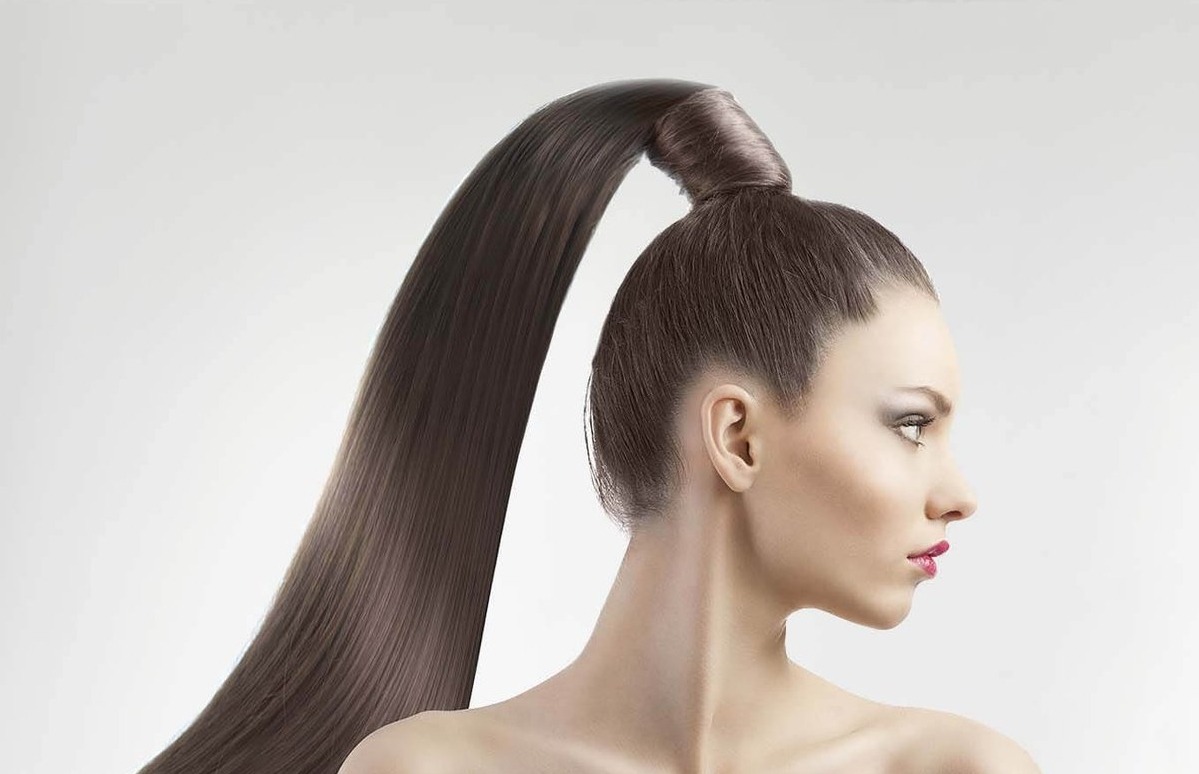 Why is everyone talking about the Ponytail Facelift – again?  Terms in plastic surgery which are catch phrases surface and resurface as the need to market sometimes outweighs the need to deliver and send clear clinical messages to the public.

Is the Ponytail Facelift just another name for something else?

What is the ponytail face lift?  It is basically a minimal incision face lift that is used for younger patients who have only a minor amount of laxity that can be corrected via tension of skin with lesser incisions.  The concept is that the facelift mimics what the effects would be if you were to have an extremely tight and high ponytail that would pull your skin and facial tissues into a “swept back” position which would give a more youthful appearance.

Basically, this term is neither new nor is the procedure.  It is better understood as another exercise in marketing, which is made evident by the fact that while some are touting this as “new”, a Los Angeles plastic surgeon actually trademarked this procedure years ago.  Therefore, not only is this not new but this is certainly not the stuff that scientific and peer reviewed journals are made of.  Theoretically and ethically the trademarking of surgical procedures is not “the done thing” by those who ascribe to the Hippocratic oath but the allure for doctor and patient alike in a world that wants to see all things be possible at a reasonable price, without bruising, downtime, risk and the need for decades of experience is becoming more and more overwhelming.

What are the different types of facelifts?

So in this ever confusing world of information bombardment, what is the Ponytail Facelift and how is it different from other facelifts?

The Full Facelift: Long term, natural & real results for patients in their 40’s & up 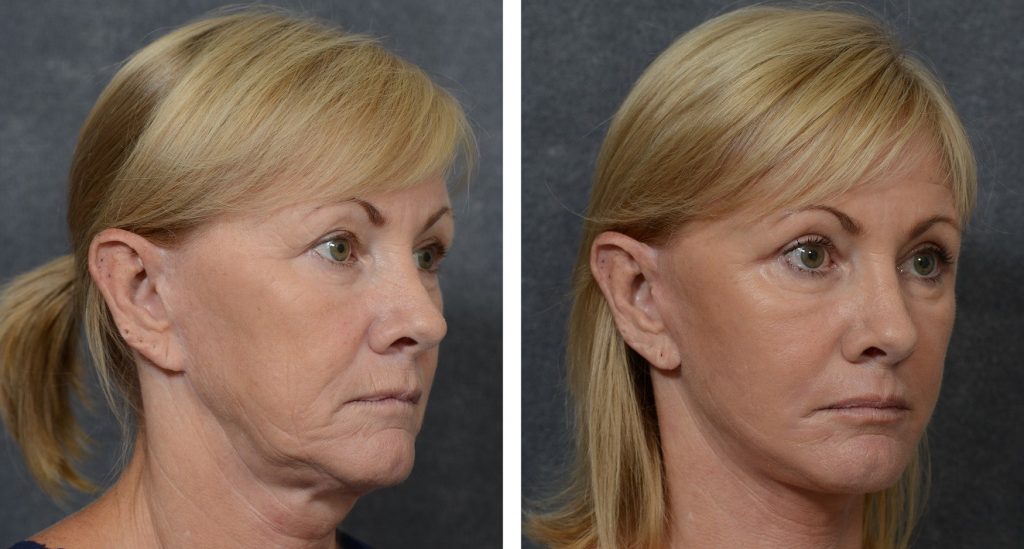 Before & After Facelift Surgery by Dr Hodgkinson

The Full Facelift offers long term results and the maximal aesthetic improvement and is normally sought after by women and men from their 40’s and above.  Terminology associated with these facelifts are “Deep Plane” facelifts, “SMAS” facelifts and “SMAS Platysma” facelifts.

As we age, it is not only our skin that loses its tone and elasticity and starts to sag.  The underlying tissues such as muscle, fat pads and the connective ligaments of the face are also deteriorating, stretching and relinquishing their youthful position.  Basically, other than our bony structures, everything is heading south with time.

Just how we age and what areas age first differ from individual to individual based on their lifestyle, health and genetics but that we all lose the integrity of the underlying tissues of our face and body with time is an unavoidable truth.

Full Facelifts give natural results as they do not stretch the skin.

The Full Facelift is able to give the patient the longest lasting and most natural result as it deals not only superficially with the skin but also with all the underlying tissues simultaneously.  The Deep Plane Facelift is the same as the SMAS facelift as both address the deep underlying tissues.  The SMAS (submuscular aponeurotic system) is a thick layer of tissue that in the SMAS or Deep Plane Facelift is first dissected and repositioned to its natural youthful placement.  This reattachment of the tissues to their former position means that the skin when repositioned is not under any tension but merely re-draped across the youthful contours of a crisp jawline, an elevated cheek and relaxed face.  This lack of tension also means that any incision lines are not under tension to create visible scarring or the tell-tale “tight” and stretched look associated with a poor facelift.

The SMAS Platysma Facelift addresses the deeper tissues of the neck as well as those of the face.  The platysmal bands of the neck also lose tone and elasticity as we age and give a haggard look to the neck extending sometimes as far down as the décolletage.  It was common in facelifts in the last century to address the face and not the neck and hence patients would have a more youthful face but it was obvious that this was not natural as the neck remained lax, and sagging.  The SMAS Platysma Facelift addresses all these tissues to ensure that all the aesthetic units of the face and neck are dealt with simultaneously to give an overall more youthful appearance.

The Minimal Incision Facelift; Less incisions, downtime & results for patients up to their 40’s 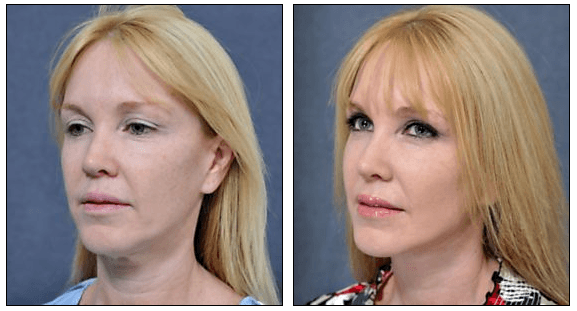 Before & After Mini-Facelift Surgery by Dr Hodgkinson

The Minimal Incision Facelift has its place in younger patients up to their 40’s who have some laxity which can be addressed by re-tensioning of the skin only.  These lifts can have various vectors of pull: vertically are diagonally dependent on the converse vector at which the patient’s skin is sagging or losing its tautness.   These minimal incision skin lifts go by many names including the Ponytail Lift, the S-Lift (S for skin) or MACS (minimal access cranial suspension) Lift.

The benefits of these lifts are that they require less dissection and less incisions therefore less downtime.  If done properly by an expert, they also do not result in scarring or stretching that will preclude the patient getting an excellent result from a Full Facelift in the future as they continue to age.

There is a semi-surgical facelift that is flouted by some as non-surgical being the Thread Lift.  The Thread Lift goes by many names including APTOS Threads of the Feather Lift.  These sutures/threads are inserted into the face to lift the tissues.  The problem is that because they can only form tension at a single point the tissues are under tension creating a shorter term and more limited result.  Because these threads initially were barbed they inserted smoothly one way and then relied on the barbs to hold the result.  The problem being, that to remove these sutures created damage to the underlying tissues and channels of scar tissue in the face making any future dissection or lifting of the face more difficult and certainly compromised.

To this end, resorbable thread lifts have been introduced including the PDO Thread Lift (Polydioxanone) and Silhouette Soft Thread Lift.  These sutures are said to resorb in the face after a period of time and therefore not need removing at a later date but it remains to be seen the extent to which their insertion will create scar tissue; some scar tissue being inevitable from the disruption of the tissues on insertion.

The impossible quest for a Facelift with natural results & no downtime

The quest goes on and on with surgeons and medical device companies trying to come up with something “new” to sell to the growing market of patients who are wanting to enjoy their lives to the fullest as they age and want a youthful appearance to match the way they feel.  The creation and resurgence of new terms like Ponytail Lift to make the same Minimal Incision Facelift sound “new” is ongoing and with the ever-increasing number of trademarked terms and marketing jargon comes the inevitable mounting confusion for the consumer.

The truth is that a real facelift is real surgery.  Real surgery, to be done well requires real expertise.  Less surgery, less incisions will mean less result.  In the younger patient up to their 40’s anti-wrinkle injections, injectable fillers, skin tightening treatments such as INFINI and minimal incision facelifts can make an improvement to the patient’s appearance.  There comes a time, however, when these non-surgical and minimally invasive procedures are a waste of time and money if the patient is seeking a real and lasting result.