Rhinoplasty Combined with other Facial Surgery to Create a Balanced Profile 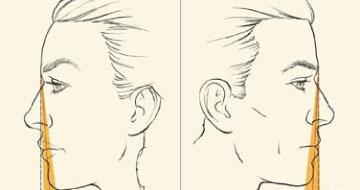 Rhinoplasty (nose reshaping) surgery is often combined with other cosmetic facial surgery procedures to create a more balanced profile.  Rhinoplasty as a surgical procedure in itself is particularly rewarding for patient and surgeon alike.  It is a procedure which can make both an aesthetic improvement to the nose as well as address functional issues such as breathing.  In addition to the nose being given a more attractive appearance, rhinoplasty surgery when individualized for the patient’s features can create a uniformity to the face as a whole. In sculpting a more aesthetically pleasing nose, however, there are often other elements of the face which need to be considered if the facial features are to be brought into balance. 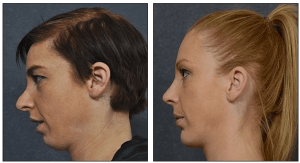 Before & After Secondary Rhinoplasty Combined with Chin Implant by Dr Hodgkinson

Issues of balance in the face can appear from a very young age such as a receding chin or develop with age such as noses developing especially in puberty. Trauma or illness can also play a role in the features of the face becoming misaligned. Broken noses due to sport or an accident, areas of the face resected due to skin cancers, dog bites and other incidents also cause people to seek out plastic surgery hoping to restore and often improve the uniformity of their facial features. Balance can also be lost through the ageing process as tissues, skin, fat and muscle alike start to sag and lose their tone and elasticity. Patients seeking plastic surgical procedures such as rhinoplasty to balance their profile start from their late teens once puberty has subsided through to their golden years. The range of procedures that patients seek in conjunction with rhinoplasty range from chin augmentation, to neck liposuction, face and neck lift, brow lift and even cheek implants.

Just as artists use dimensions and angles to determine how to draw a face, so too do surgeons use measurements and defined lines and angles to determine the range in which the features of the face are considered to be in balance. It is important to note that balance must never be confused with exact symmetry as no natural form is perfectly symmetrical as is no person. Not only is it not realistic to expect complete symmetry but it would look unnatural if exact symmetry were to be made the endpoint. That is why the lines and angles used in surgery take into account ranges of measurements to allow for ethnicity and individuality.

One of the most commonly associated facial features with the nose, especially in profile is the chin. If the chin protrudes or recedes too much then even if the patient has a rhinoplasty, the facial will not be in balance unless the chin is addressed as well. To understand facial balance in profile and the relationship between the nose and the chin, it is imperative to understand the nasomental angle. The nasomental angle can be determined by drawing a line from the top of the bridge of the nose (the most depressed area at the top of the nose) to the tip of the nose and then from the tip of the nose to the point where the chin protrudes the most. Balance is considered to be achieved if this angle is between 120-132 degrees. 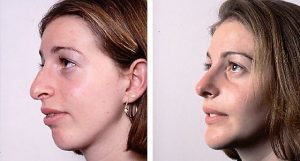 Before & After Rhinoplasty Combined with Chin Augmentation Surgery by Dr Hodgkinson

If the chin is receding, known as microgenia, it can give a weak and undefined look not only to the chin but the jawline as well. In these instances, the patient may be a candidate for a chin implant. Chin augmentation surgery with an implant is a one-time procedure and does not need to be repeated. The implants are made of a solid but natural feeling silicone material which is the same material used in other medical devices like prosthetic heart valves. The surgery can be performed at the same as the rhinoplasty procedure; both procedures being done on an outpatient basis. 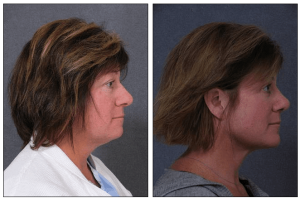 Before & After Rhinoplasty Combined with Neck Liposuction by Dr Hodgkinson

Other procedures that are often combined with rhinoplasty to create a more balanced appearance are Face and Neck Lift Surgery and Neck Liposuction. Just as a receding chin can compromise the profile the jawline can also lack definition due to skin laxity or an excess of skin or fatty tissue in the neck area. To correct facial imbalance in these instances either a neck lift or liposuction to the neck might be considered depending on the patient’s age. If the patient still has elasticity of their tissues, generally those patients before the age of 40, then the neck and jawline can often be addressed by liposuction / liposculpture. For liposuction of the neck, very small cannulas are used to remove the fat and sculpt the area. This is very fine work and plastic surgeons with years of experience in this procedure are able to get very pleasing results. Liposuction to the neck can also be performed simultaneously with rhinoplasty surgery as a day patient. 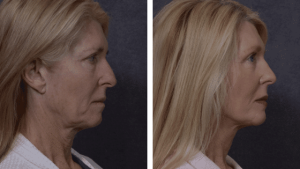 For older patients with laxity of the jaw, to create a balanced and aesthetically pleasing profile, a surgical face or neck lift might be appropriate. Whilst face or neck lift surgery is more invasive than liposuction, it is the only way that the issue of skin laxity can be addressed at the same time as the issue of restoring the fatty and muscular tissues to a more youthful position. Deep dissection is required to access these structures and to reestablish them in line with the more defined features of youth to give a balanced appearance. 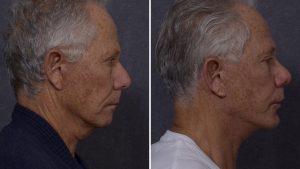 Especially in men as they age, a rhinoplasty in combination with a face or neck lift alone may not be enough to create or reestablish a strong masculine appearance. In fact, all procedures can be combined: rhinoplasty, face lift and chin implant to create a strong, balanced and yet natural appearance.
As in all cosmetic plastic surgery, the most important decision you will make if you decide that surgery is for you is who your surgeon will be as their expertise and experience are what will determine the quality of your result. Dr Hodgkinson has over 30 years’ experience in cosmetic and plastic surgery and is one of only two surgeons in Australia to be invited to join the international rhinoplasty society. He is also considered an expert on face and neck lifting and is invited to publish his work in plastic surgical journals as well as lecture to plastic surgeons internationally on his techniques.

To learn more about these procedures or to book your consultation to speak to Dr Hodgkinson email [email protected] or call us on 02 9362 7400.