“Growing older and looking good are not mutually exclusive”

I am seeing male patients in the over 50 age group more and more frequently in my clinic.  Mostly these are successful men, who for one reason or another find their status in life has changed.  Either the family is moving on; they are changing careers or finding a new direction in their life.  Some of them are widowers; some of them are just encouraged by their wives or partners to look the best they can be.  In every instance there is a sense that inside they feel more vital than the way in which the world increasingly perceives them.

Because many men in Australia are involved in outdoor activities, such as golfing, sailing, tennis and surfing as well as team sports, the ravages of the sun take their toll compounding the problem of normal ageing and deterioration of the quality of the skin. As early as in their forties and certainly in their fifties many of these men tend to lose the definition of their jaw and chin and start complaining of a “turkey neck”. It is difficult for men as they shave on a day to day basis, to ignore the fact that the jawline and neck are becoming “saggy”.

Most commonly men initially choose eyelid surgery and then progress on in their mid-fifties to facelifting procedures.  Along with facelifting, I often perform chin implant surgery in Sydney  to give stronger and restored masculine definition to the face.  The most important thing, however, is to restore the patient’s jaw and neckline, thereby reducing the saggy “turkey neck” by platysma surgery which addresses not only the skin but the muscles of the face and neck, removing or recontouring the fat of the jowls and re-draping the skin in a natural way, so as not to distort the earlobes or show any scars.

The incisions from a facelift in a male are different from those in a female, in that the incision goes carefully into a crease in front of the ear and does not distort the beard line, whereas in a woman, the incision goes behind the tragus of the ear and into the ear.  Experience in the specific aesthetics and techniques for male surgery are important to achieve natural results. Men, as much as if not more than women are terrified of having the look of having been “operated on”.

Males do have a slightly higher incidence of haematoma; this is because their skin is irritated from years of shaving and tends to bleed easily; so the surgeon must be aware of this potential complication.  Even so, we always perform the surgery on healthy patients on an outpatient surgical basis and the patient returns home or to a local facility, with one of our private nurses for one on one overnight care to reduce the chance of a haematoma or significant bruising.  Most patients take about 10 days off work and gradually resume their active lifestyle in four to six weeks.

Another procedure commonly sought after by men is rhinoplasty or nose reshaping surgery.  This procedure, like body contour surgery spans the age range from young to mature age.  Many mature age men who sustained fractures to their nose and had subsequent breathing problems or who formerly considered corrective surgery as too vain are seeking not only to have their breathing improved but the appearance of their nose improved as men become more and more aware of the benefits of feeling good about their appearance.

While male cosmetic surgery in the mature age male tends to concentrate primarily on the face, more and more commonly men are seeking body contour surgery such as liposuction / liposculpture to their “love handles” or “ man boobs” to counteract the little weight many gain in their middle years. This too goes in hand with the maintenance of the active lifestyle and the wearing of swimwear, sports gear and fitted clothing especially with the rise of male fashion consciousness.

We all know that the “baby boomers” are going to live a longer life.  It is believed that 50% of people in Australia now over the age of 65, will live to 100 years and with this in mind, retirement in one’s 60’s is no longer such an attractive or financially viable option.  Staying active in the workforce, maintains more than one’s standard of living but also one’s self esteem and connectedness.  The baby boomers also have a lot to offer in the way of experience and expertise.  As more and more men and baby boomers in particular reassess their futures and their capacity to remain vital professionally and socially I am sure that we will continue to see an increase in cosmetic plastic surgery for mature aged men. 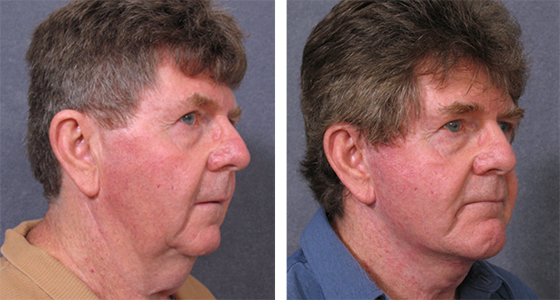 Male Before and After Facelift by Dr Hodgkinson

A PDF version is available here.