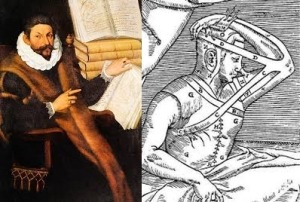 Gaspare Tagliacozzi is often proclaimed as the founding father of not only rhinoplasty (nose reshaping surgery) but of the surgical specialty of plastic surgery itself.

Tagliacozzi was born in Bologna in northern Italy in 1545 where he was to study before becoming a professor of surgery and then later of anatomy at Bologna University.  What Prof Gaspare is best remembered for, however, is being the innovator of the European full nasal reconstruction.  He technique which required the upmost in patient cooperation involved stitching a flap of skin from the inner arm onto the base of the defect where the patients nose had either been amputated or had collapsed.  Whilst this sounds difficult but not untoward, the trick was that the patient needed a special device (a leather brace) to hold the arm in the correct position for at least 2-3 weeks before detachment.  The reason for this is that the blood supply from the arm would feed the skin flap to be used for the nose until such time as the graft had “taken” and had harnessed a blood supply of its own.  It is hard to imagine in our modern day and age, anyone spending up to a month sitting upright with their arm bent and surgically attached to their face.

Why would patients desire such a surgery so much that they would endure this?  Back in “the day” loss of a nose was usually from one of two circumstances: loss of a duel by sword or syphilis.*   At this pre-penicillin time in history, syphilis carried with it a serious social stigma and as a disease that caused the decay of soft tissues, persons with collapsed nasal structures were easily identifiable as being “unclean”.  Neither being identified as syphilitic or the “defeated” from a duel were positive public projections for a young noble person as they both sent the message that the noseless one was a loser of one sort or another.

This technique as described by Tagliacozzi was practiced for hundreds of years up until the early 19th century when it was eventually replaced by the forehead skin flap perfected by Von Graefe.  The forehead flap technique with various improvements is still being used today and celebrated it’s 200 year anniversary last year in 2019.

With the opening up of world literature via translation and movement between higher institutions of learning, it would be discovered that nasal reconstructions were being carried out on the Indian subcontinent since before Christ (a topic to hopefully be addressed in future blogs).  Regardless, the innovations of Professor Gaspare Tagliocozzi were and remain courageous, groundbreaking and fundamental to all flap surgery in understanding the critical nature of vascular supply in the survivability of transplanted organs and tissues.