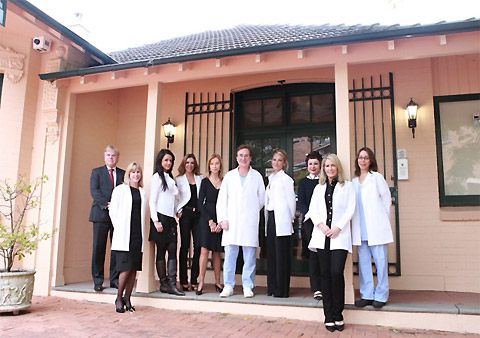 Dr Hodgkinson with the staff of the Double Bay Day Surgery

It is surprising to many patients and to their referring general practitioners, that patients can have quite extensive cosmetic surgical procedures such as a facelift or body contour procedures, such as abdominoplasty or breast reduction as a purely outpatient surgical procedure. At the Double Bay Day Surgery, established in 1997, as a fully licensed for general anaesthesia, accredited, free standing outpatient surgical clinic in prestigious Double Bay, this in fact is the norm rather than the exception.

I personally was trained in the United States at the Mayo Clinic in plastic surgery. This was a huge institution in Rochester, Minnesota where there was not really a philosophy of outpatient surgical procedures. The patients who travelled to the Mayo Clinic were in-patients and often had particularly difficult or advanced surgical problems. During my nearly 6 years of residency at the Mayo Clinic, the attitude towards cosmetic surgery was somewhat negative. Initially, when plastic surgeons applied to do cosmetic surgery at the Mayo Clinic, they were told, “we look after sick people here” and facelifts were done as in-patients. In those days, one side was done at one time and a few days later, the patient remaining an in-patient had the other side of the face done, mostly because of the fear of developing post-operative haematoma. Things have come a long way since the early 1970s.

Realising that cosmetic surgery was an integral part of plastic surgical practice, I then completed a Fellowship in Newport Beach, California, where for the first time ever, I was exposed to outpatient cosmetic surgical procedures such as facelifts, rhinoplasties and blepharoplasties performed in the surgeon’s office based surgery. In the United States, at this time, in the late 1970s, office based surgery was being developed as well as standards for these facilities and a new society was established called the American Society for Accreditation of the Ambulatory Outpatient Surgical Procedures referred to as AAAA (today’s AAAASF). Surgeons in this era, especially in California, Nevada and Florida, forged a new paradigm for cosmetic surgery, which in those days, in the 1970s and 1980s was booming.

When I went into practice in 1980, having been exposed in the Western States to this type of delivery system for cosmetic surgery, I, in conjunction with another surgeon, built a two operating room, free standing outpatient surgical facility to the standards of AAAA. Liposuction had been introduced at this stage also and this fit ideally into outpatient surgery. Over the next 12 years in the United States, I built several other facilities with day surgery outpatient operating rooms.

Returning to Australia in 1990, I found there was no such thing as office based surgery and the concept of outpatient surgical cosmetic surgery was fairly remote and not established. Patients were still having most of their procedures as in-patients. After performing some of these operations in private hospitals, I could not see any advantages at all, subjecting the patient to the overload of the private system and followed the other subspecialists such as Ophthalmology and Endoscopy in constructing my own fully licensed and accredited day surgical facility (The Double Bay Day Surgery).

The Double Bay Day Surgery has two floors; the top floor is dedicated to consultations, theatre management and non-surgical procedures, such as Injectables, Thermage®, Laser treatments; the bottom floor consists of the main day surgery facility which consists of two operating rooms, one for general anaesthesia, the other one for intravenous sedation. The facility was built to the State Board of Health Regulations, was modified based on the special needs of plastic surgical patients and has parking for 6 vehicles and good ambulance access if needed. There are two first stage recovery beds and two second stage recovery beds.

Most of the time, endotracheal intubation is used but the laryngeal masks can be used for some operations that are shorter in length and do not require too much postural change. Total intravenous anaesthesia is used for the majority of cases. A BIS monitor has been used for the last three years which accurately assesses the level of anaesthesia for the patients during the procedure. Four or five Registered Nurses assist in the procedures for Anaesthesia, Recovery, Scouting, Scrub Nurse and Assisting. I generally have either a Nurse assist or a Fellow Surgeon assist.

The procedure of Facelifting has improved dramatically over the last few years and now patients do not have the stigma of having a tight face or distortion of their hair. Aesthetic concepts have improved significantly to give a patient a more natural and less “pulled” look.

We insist that all patients are ASA1 candidates and all patients have a full blood count pre-operatively with assessment of their Hepatitis C and HIV status. We also insist that in certain procedures such as facelifting, abdominoplasty or breast reductions in Sydney, that smoking is desisted from by the patient for at least two to four weeks prior to the surgery and continue to be abstinent during the post-operative period.

Two issues that relate to Facelifts are hypertension and urinary retention. The operative procedure usually takes in the range of 2œ to 3 hours, so monitoring post-operatively, hypertension and post-operative anxiety is very important in reducing the risk of a patient developing hypertension and hence, a haematoma. Post-operatively, patients are cared for in a local hotel or apartment by one of our own private nurse or in their home if they live nearby. They apply ice wraps to the face, elevate the patient’s head and reduce any anxieties or discomforts with appropriate medications. They also monitor blood pressure and can use the judicious medications as instructed by myself or the Anaesthetist to control blood pressure if that becomes a problem. The day after surgery the patient’s dressing are changed by the Nurse and the patient is seen in the clinic on Day 2, Day 7 and Day 10 for wound care and by Day 10, most patients are ready to face the public.

We now look for
ward to the next 15 years. Since 1997, the Double Bay Day Surgery has maintained its licensure and accreditation. We believe that our impeccable record of providing safe, comfortable and highly supportive cosmetic surgery has paid off for the patients and for our reputation in comparison to private hospital in-patient services. I believe outpatient surgical services are much more ideal for cosmetic surgical patients. Unfortunately for patients in the private hospitals, the nursing staff is often over-taxed with too many patients and the well patient or the patient who has elected to have a cosmetic procedure, is often seen as fatuous and unfortunately, do not receive the necessary one on one attention that they need. I believe our success is also due to our very consistent staff many of whom have been working with us for nearly 20 years. We avoid agency staff as much as possible and only use these services when absolutely necessary for example when staff are on vacation.

We operate 3 full days a week and our experience in comparison to those patients who used to be treated in in-patient care overnight is that the patients are less stressed, less prone to complications when they either are nursed as a one on one in a hotel, or apartment locally or in their own home, supported by their family and in a non-threatening and familiar environment.

As a plastic surgeon, I believe that Day Surgery and Cosmetic Surgery are an ideal fit.