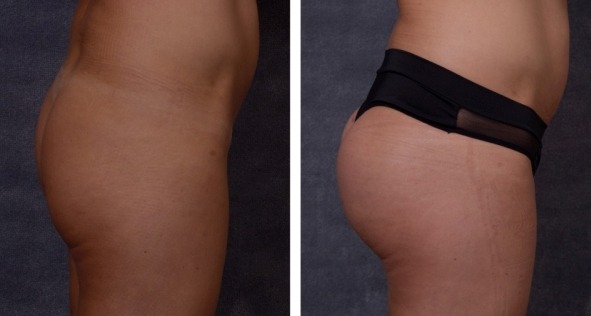 Before & After Female Buttock Augmentation with Implants by Dr Hodgkinson

Once again there has been an increase worldwide in the number of cosmetic surgical procedures performed but who would have guessed that the fastest growing procedures would be surgery to augment and/or beautify the buttocks!

Buttock surgery has always been popular in South America where surgery to lift the bottom or augment the gluteal muscles is nothing new.  In fact, Dr Hodgkinson himself has been performing buttock augmentation with gluteal implants and buttock lifting since the late 1980’s and early 1990’s when he was in practice in the United States and had a large Central and Southern American patient base.

And while gluteal implants are nothing new, neither is the idea of voluptuous backside as an iconic body part.  Jennifer Lopez is perhaps best known as the original poster girl of the derrière who as an already acclaimed actress had her debut Latin pop album go platinum in 1999.  This was followed in 2001 by Beyoncé, then with Destiny’s Child who wrote, produced and performed the song “Bootylicious” presaging an anatomical feature which she herself would become synonymous with: the “booty”.  In Latin countries, however, the attraction to the body and booty beautiful had never waned.

What then made then 2015 the “year of the rear” according to the American Society of Plastic Surgery? The society’s statistics noted that buttock implants were the fastest growing cosmetic surgical procedure in that year up 36 percent over the previous year with buttock lifts also up 36% and buttock augmentation with fat grafting (such as the Brazilian butt lift) up 28%.

Perhaps there was some influence from the media lead up to the Rio Summer Olympics.  Perhaps it has been the increase in the number of celebrities across a wider ethnic spread who are embracing their best assets: the Kardashians, Iggy Azalea and Amber Rose are just a few examples.

Regardless of the cause of the surge, it has been noted even here in Double Bay.  The number of patients seeking buttock augmentation and buttock lifting by Dr Hodgkinson has also soared.  The most common procedure performed is buttock augmentation with implants.  Both gel and solid silicone implants are available but the most commonly used implant is the solid silicone one.  The idea of the implant is to give projection to the buttocks and mimic well-formed gluteal muscles like those of a Latin dancer.  The idea is not to mimic the fatty deposits of a large backside but a well formed, firm backside. These implants can be bought in various shapes and sizes or can be customized depending upon the patient’s desired result and their physiognomy. 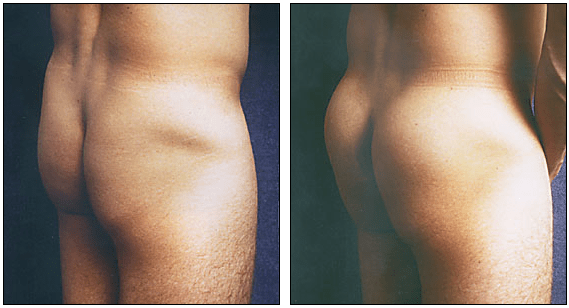 Before & After Male Buttock Augmentation with Implants by Dr Hodgkinson

Buttock implants are also not only for women.  Men also, commonly seek buttock implants.  A flat bottom is not seen as masculine or muscular and this can send men to the gym for hours and hours.  For those unable to develop the shape and physique they are seeking, buttock implants can be an alternative.

The surgery is performed in our fully licensed and accredited day surgery centre on a day basis.  The procedure itself is done under a light general anaesthesia and involves inserting the implant underneath the gluteus maximus muscle.  The reason that implants are used more commonly than fat injection is because fat resorption is unpredictable even in expert hands as it has to do with the ageing and health of each individual’s body.   This means that the shape and longevity are less predictable and the procedure often needs to be repeated over time as the fat absorbs as it does in all areas of the body as we age; and let’s face it , who wants a “fatty bum”?

For more information on buttock enhancement surgery or to come in and see what Dr Hodgkinson can do for you, please email us at [email protected] or call us here at the clinic on 02 9362 7400.