Home » Do you have droopy eyelids? Eyelid surgery might be for you!

Do you have droopy eyelids? Eyelid surgery might be for you!

We have many prospective patients phone who say, “I have droopy eyelids.  Is there anything you can do for me?”  The answer is yes!  Upper eyelid surgery known as a blepharoplasty can address this and improve not only your appearance but in many cases your vision as well.

People with very heavy eyelid drooping or eyelid sagging due to excess folds of skin that hang down over the eyelid and bend the eyelashes, sometimes even causing the eye not to open completely, may be diagnosed with visual occlusion.  Visual occlusion can be corrected with upper eyelid surgery, as by removing the excess skin the eyelids open up to increase the field of vision as well create a less tired and more youthful appearance.  If you are diagnosed by Dr Hodgkinson with having visual occlusion, then there is a Medicare item number associated with the eyelid surgery which means no GST applies to the fees and there is a rebate as well. 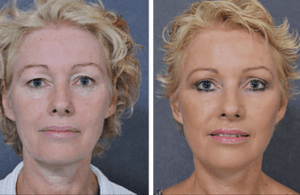 There are many causes of eyelid sagging from genetic or ethnic background to excessive expression, allergies, sun exposure and ageing in general.  Along with causing possible visual impairment, they also cause the sufferer to look not only old but tired or stern.  After blepharoplasty patients often say how friends and colleagues comment on how refreshed and well they look.

Of course as with all procedures, the most important choice you make if you decide that eyelid surgery is for you is who your surgeon will be.  Blepharoplasty surgery requires years of experience and great finesse.  If too little tissue is removed the result and or the scars may be disappointing but worse yet if too much tissue is removed it could result in the patient not being able to close their eyes leading to dry eye and a series of other possible ophthalmological problems.

The public health insurance program typically does not cover cosmetic surgery, but for cases in which a patient’s sagging eyelids significantly hinder their vision, it does pay to have them lifted. In recent years, though, a rapid rise in the number of so-called functional eyelid lifts, or blepharoplasty, has led some to question whether Medicare is letting procedures that are really cosmetic slip through the cracks – at a cost of millions of dollars.

Plastic surgeons say there are a number of legitimate reasons for the spike, including a tendency among the elderly to seek fixes for real medical issues they might have quietly suffered through even a decade ago. But surgeons also acknowledge an increased awareness of the surgery fueled by reality television, word-of-mouth referrals and advertising that promises a more youthful appearance. And doctors concede they face increased pressure from patients to perform eyelid lifts, even when they do not meet Medicare’s requirement that peripheral vision actually be impaired.

John LiVecchi, a Florida plastic surgeon, who has had an eyelid lift himself, disputes that patients are flocking to the procedure primarily with vanity in mind. Patients with droopy eyelids often don’t realise how much the droopy skin is narrowing their field of vision, he said. LiVecchi said he jokes with his patients that he doesn’t want them driving in his neighborhood until after the surgery. “It’s safer for society,” he said.

The benefits of functional eyelid surgery for some patients are documented. A 2011 study published in the journal Ophthalmology, for example, found that the surgery provided “significant improvement in vision, peripheral vision, and quality of life activities.”

Considering eyelid surgery? Dr Hodgkinson has over 35 years of experience and has performed innumerable blepharoplasties on upper and lower lids on women and men.   His results speak for themselves.

This article was originally published June 2013