Breast implant surgery remains one of the most popular cosmetic surgery procedures in Australia. Recently, new titanium-coated gel implants have been introduced as part of a trial to see whether they can reduce the incidence of scar tissue forming around the implant.

Two other types of breast implants available are filled with either saline or cohesive silicone-gel. One significant difference between the two implants is the effect if the implant ruptures. It is much easier to tell if a saline implant has broken because the implant deflates and the saline solution is absorbed by the body. The procedure to replace a saline impant is relatively straightforward in comparison to a gel implant. When a cohesive gel implant breaks, the gel cannot migrate far into the tissue, and when it does it is somewhat similar to when chewing gum becomes stuck in carpet, and can be difficult to remove.

Saline implants remain popular at my practice for women who like a more subtle A or B to C result, usually in the 250cc to 330cc range. These are often healthconscious women who, because of the silica gel spillage factor, are not interested in having anything other than the most natural product in their bodies.

Saline implants are often chosen by models and dancers because of the ‘shimmying’ effect of the implant. The implant moves in a natural way, flattening out when the patient lies down. It also falls into a teardrop shape when the woman is standing up. The cohesive gel implants, on the other hand, appear to me to have a fixed ‘headlight’ appearance. Most of the time, the implants are placed in a partial sub-pectoral position or dual-plane position, meaning that the implant is partly under the muscle and is completely covered by tissue. It should not give an unnatural sub-glandular appearance similar to that of Victoria ‘Posh’ Beckham’s obvious implant look. I have performed thousands of breast augmentation procedures in Sydney over the past 30 years and am still convinced that, in the majority of patients, this operation probably gives as much satisfaction as any plastic or cosmetic surgery procedure.

However, with caution, I realise that a small percentage of women will be dissatisfied with the procedure if they experience unfortunate complications associated with having an implant in their bodies. Fortunately, over the years the implants have improved and newer versions are continually being trialled to improve them further. We do not have a perfect product but perhaps the titanium-coated gel implant might reduce the complication of capsular contracture around the implants, which is the biggest ‘bugbear’ of the operation.

Many patients these days are highly health-conscious and do not wish to have anything other than the ‘safest’ implant in their bodies. Although saline and gel implants have the same rate of breakage, I believe it is important to understand that a gel implant is more difficult to detect when it is broken. If the gel implant ruptures, it is much more difficult to remove the gel from the tissues.

In contra-distinction to the gel implant, it is very easy to know when the saline implant is broken as the implant deflates and the body has saline intravenous fluid absorbed into it, without damage being caused to the breast or surrounding tissues. The patient is immediately aware of this happening and can have the broken or ruptured implant replaced. 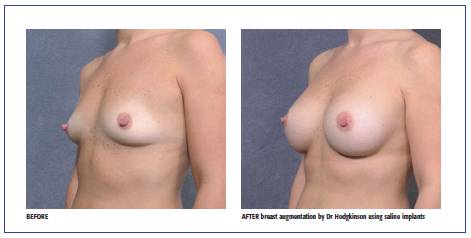 Breast-lift and breast reduction procedures remain very popular for larger breasted women (typically over a DD cup) or women with significant sagging, where the nipple points downwards. Many of these patients suffer from back strain, neck pain, notching of the shoulders and skin rashes under their large breasts, especially during the summer months.

Breast-lifts (mastopexies) as well as breast reduction procedures have been sought after by women ever since plastic surgery became a defined field in private practice after World War I. For nearly 80 years, we have been refining these operations. We try to reduce the amount of incisions on the breast tissue but there is always an incision around the nipple areola complex, and a fine incision underneath the breast, which simulates that left by the mark of a brassiere in the vertical aspect. Some teenagers with parental support choose the procedure for comfort and for the same reasons as older women, because it allows them to participate more in sports and wear more fashionable clothing.

‘Breast-lifts and reductions have been sought for as long as plastic surgery has been a defined field.’ 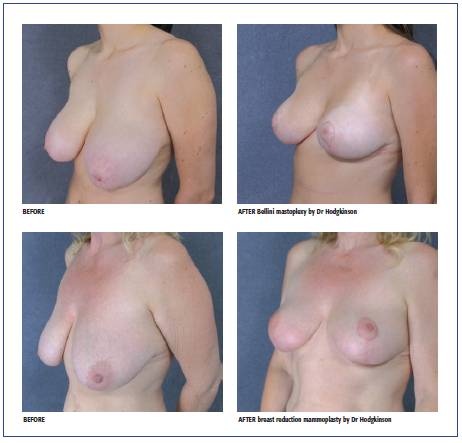